So you're going to Kielder are you... what about the midgies? (Part one)

Whilst I have been known to stand my ground against the odd brown bear whilst in the Rockies or to stare down a troublesome tiger in Bengal, one beastie I will have nothing to do with is the Kielder Midge.

Hanging around in swarms these little tinkers will have you pleading for mercy within a matter of minutes.  However, I will let you into a little secret.

Are you ready? You may wish to sit down.

Kielder Campsite. A ruse by the powers to be! We entice visitors with our glorious landscape and dark skies.

We have been successfully feeding and breeding midges for 14 successful years.

Heh, you believed me for a minute didn'tyou.

Now then, you may think and seem to observe us 'locals' [Go on, try reading locals again without the West Country accent in your head.] are not affected by the flying nippy teethy things aka: Midgies. Well we are. But.....and it's a big but, it's the frame of mind that is different to most visitors.

I say most visitors, as there is a band of brothers and sisters who, despite knowing that we have a few Midgies, return year after year and still enjoy themselves. These guys n gals are in the very rare: 'odd'...category. They and most locals, have a different mindset.

When a visitor arrives and there are no midgies, it's the norm. However, for us, it's a bonus! We wake, pop outside, whatever the weather, because we can; with no bites from above or below. Oh how we wallow in it. Quite often there's a little yelp or a squeal of delight from someone that's just let themselves go a little too much. Barbecues can often take place as late as November to celebrate a birthday.

As the year progresses, and the end of May looms a Kielder local will look for signs....they squint at anything small moving in their field of vision, the BBQ gets emptied and is nearer to being put away in the shed until the winter. Outside jobs are either postponed or finished.  There is usually a false alarm as someone mistakenly spots a midge, sending shock waves throughout the village. Conversations about the weather take a back seat as the lack of or number of midges takes the fore in a conversation.

And then they truly arrive, we've been waiting, expecting. So we're not surprised. We don't like them, but we are not caught out. Emptying the bins now takes on a more serious note with a midge net or a hoody worn for personal protection. The midge is [Begrudgingly] accepted.

Cue the visitor: arriving to Kielder for a Famous Five styled adventure with lashings of sunshine and ginger beer. Knowledge of the midge is sparse, but the Aldi Insect repellent is at hand. Seasoned travellers, at the bottom of their picnic basket, will have a tube of Jungle Formula. [Just saying the name can instil confidence to the average UK family]

Ok, Midgies are not here 24/7. They typically prefer the evening or mornings. And usually appear as BBQ'd burgers or brekky bacon lands mouthwateringly onto the family plate.

The first thing that tends to happen is that the family, in unison, carries out the Kielder Wave. It's a pleasing action to see, from a distance, in a car or sealed building. Within the first few minutes prior to the Midge Mass descending we give a little wave around the face, nothing too erratic, however, within a very short space of time it builds up from a delicate little flutter to a back hander that could fell a giant and a forward air slap that a 1970's mother would be proud of. The plate of food at this point is forgotten and tends to remain untouched on the table or spreads around the site during the more volatile actions of the Kielder Wave. The more volatile Kielder Wave, this is special and requires total concentration. The use of both hands is essential.

Squealing from some families adds to the confusion and Father is often blamed for not getting the Jungle Formula out of the bag quick enough. As previously mentioned, once the elixir has been anointed most families settle down.

The respite is brief. The Formula has not worked, or at least the midgies are still flying? Why? Regrettably any repellent only stops them from actually biting, but by heck do they try to find the bit you've missed. At this point all family members retire rapidly inside their vehicle or tent.

As mentioned prior, the 'local' has a different frame of mind. When asked what they use to keep the midgies away we knowingly reply: Bricks, mortar, double glazing and a pint!

I'll leave you with these great little trip advisor review where auto spell has a lot to answer for. 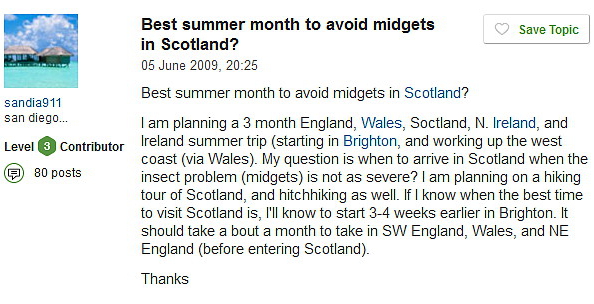 Part two to follow....how we get even with Mrs. Midge!